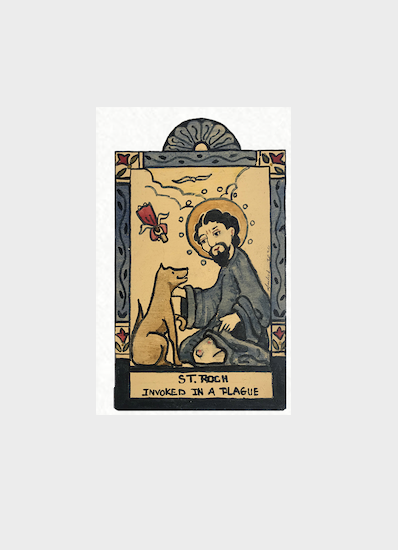 Saint Roch - Invoked in a Plague

Roch was born to a wealthy French family. After the death of his parents, he gave his wealth away and set out on a pilgrimage to Rome. A plague was afflicting Northern Italy. Roch stayed to nurse the plague victims. He eventually contracted it himself. he went out into the forest so he would no infect anyone. A dog befriended him, bringing him bread and licking Roch's wounds thereby healing him.

According to the Golden Legends an angel laid a letter beneath Roch's head saying whoever humbly called upon St. Roch for help would not be harmed by any pestilence.

"Holy St. Roch, patron of the sick we come to you in prayer to obtain for us at The throne of Divine Mercy healing for those suffering and sick in bed. May they be made well."