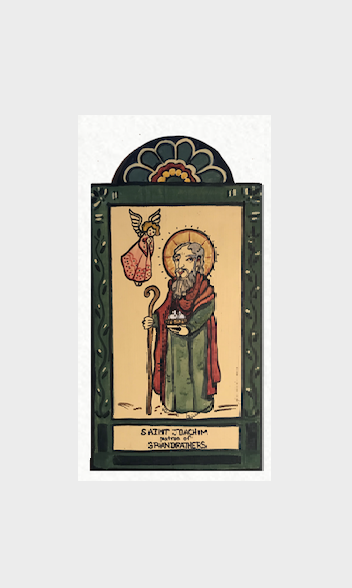 Joachim is said to be the father of Mary and husband of Anne, the grandfather of Jesus. He does not appear in the Bible, but appears in the apocryphal writings of St. James's Gospel. He also appears in the Golden Legends. He was a rich and pious man from Nazareth. He and Anne were an older childless couple living in Jerusalem — to be childless was interpreted as divine displeasure. Joachim went out into the desert for 40 days to pray about this. He was visited by angels telling him that he would have a child. He came back to the city and was met at the gate by Anne who also was visited by angel. They bore a daughter and named her Mary. It is believed that couples who do not have children until they are older will have remarkable children. He appears often in green which symbolizes hope, with doves that symbolize peace, and with a book and a shepherd's staff which represent the word of Christ, "Saint Joachim, I humbly ask you to guide me in wisdom with my relationships with my grandchildren. May I serve them well so that they can live happy, healthy lives.