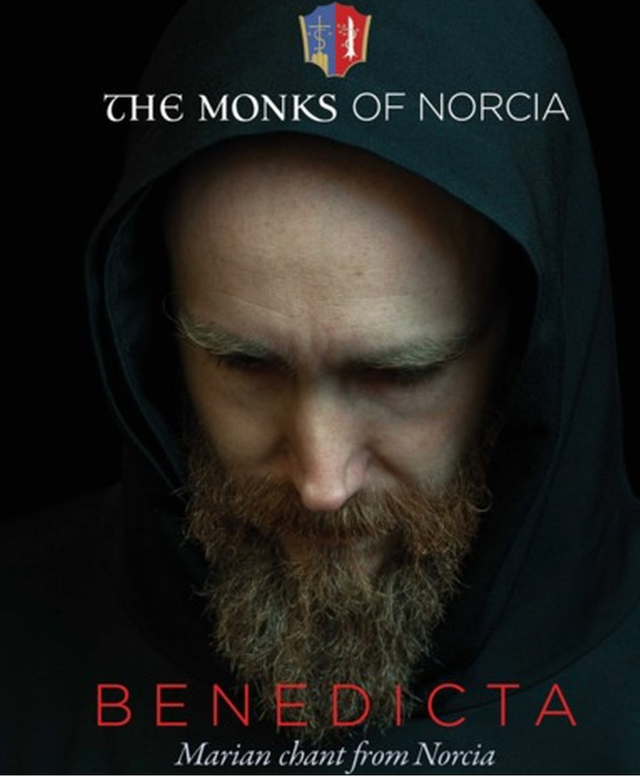 Inspiring, beautiful music of Chant at it's very best, by the beloved Benedictine Monks of Norcia, Italy. Benedicta: Marian Chant from Norcia is a glorious recording of 33 tracks of Gregorian chant that transports the listener to the Monks’ idyllic monastery in Italy.

The stunning album includes favorite Marian antiphons such as Regina Caeli, Salve Regina, Ave Maria and Ave Regina Caelorum, but also previously unrecorded chant versions of responsories, and a piece originally composed by the monks (Nos Qui Christi Iugum). Marian antiphons are a group of hymns in the Gregorian chant collection of the Catholic Church, sung in honor of the Virgin Mary

Some pieces are sung by the entire group, some by smaller ensembles of monks and others by soloists, imbuing BENEDICTA with a vast range of sound and color. Recorded on location at the monastery in Norcia, Italy, the album was produced by 11-time Grammy Award-winning producer Christopher Alder and engineered by Grammy-Award winning engineer Jonathan Stokes.

The life of the monks has always been hours of study, industry, prayer, service - and song. Monastic chant echoed off the walls of the Monastero di San Benedetto di Norcia for more than 800 years before Napoleonic laws suppressed this branch of the Benedictine order in 1810, causing a break in the continuity of music in Norcia for nearly 200 years. But when a Benedictine Community founded in 1998 by Father Cassian Folsom sought a monastery, the town of Norcia welcomed the monks back to the birthplace of St. Benedict, and the music began again.

This is the story of The Monks of Norcia. Their alluring chant has been masterfully captured by 11x Grammy Award winning producer Christopher Alder. De Montfort Music has teamed with Universal Music Classics and Decca Classics to bring this transcendent debut to you directly from within the monastery walls of Norcia.